Robotics is something that fascinates people from all around the world since forever. Although the word “Robot” has been firstly used in 1920 by a Czech writer Karel Ĉapka the oldest project of human alike robot is dated back to the year 1495 and had been drawn by Leonardo da Vinci.

Another important person in the history of robotics is George Devol, who is commonly known as the Father of Robotics after designing a working mechanical arm in the year 1954. Since then the technology has progressed in an unimaginable way.

Up until the creation of the easily accessible internet, the whole topic of robotics was reserved only to the scientists, who worked on the new discoveries in laboratories closed to the public.

Now, however, the internet allows everyone to see for themselves how robotics has progressed. One of the places that allows that is youtube, where one can find many different channels based on robotics and see what the new machines are capable of.

One of the most popular ones is called Boston Dynamics. On their youtube feed we can find videos showing the capabilities of their robots. The most popular robot that they’ve produced is called Atlas and he has an unprecedented mobility for a machine. He can not only perform one legged jumps, but he’s also capable of doing somersaults as well as 360 degree jumps. 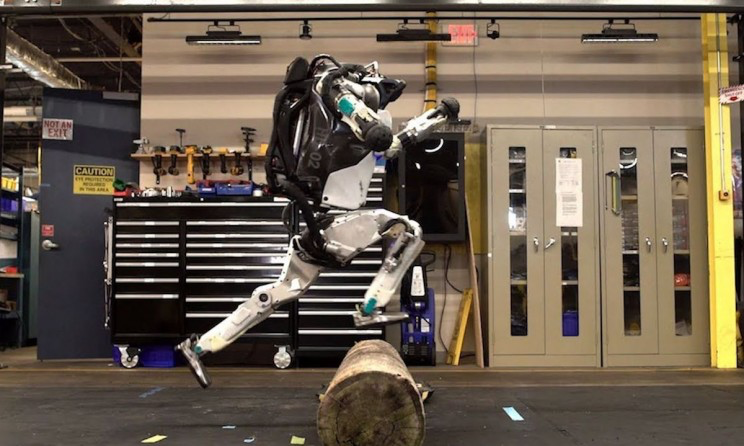 In today’s world there are many films in which robots play a huge role. Our eyes are used to seeing robots on the big screen doing crazy stuff and behaving like humans. Therefore we are not impressed, when we see a robot doing a backflip, when in the real world that is a huge achievement. Just imagine how many sensors must cooperate in order for the robot to keep the balance when landing and how many lines of code must be written, so everything is coordinated.

Lately Boston Dynamics has uploaded a video, which went viral. It showcases all of their most popular robots, while dancing. It is hardly imaginable how machines can move in such a way. When I watched it for the first time I was really impressed. It was almost like watching a science fiction movie, that is happening in real life in front of our lives.

I highly recommend you to watch it and I promise you will not regret it! (Check out other videos as well! )

Link to the video here : https://www.youtube.com/watch?v=fn3KWM1kuAw

Coronavirus and pandemic caused by it affected many aspects of our lives. Places, which were the destinations of our daily visits, had to be closed in order to stop the virus from spreading. The government had to face a difficult choice which ones have to be shut down and which might remain open. As you can imagine there were people, who did not see any logical explanations of some of the new regulations.

As an example a lot of controversy had been created by the law saying that all gyms have to be closed. Why can churches,which are mostly visited by older people, stay opened, while gyms,  visited in majority by healthy people in their prime, must be closed down? Why do the doctors say that staying fit is one of the most important things one can do in order to protect him or herself from the virus, but the place essential for it is closed? These are only some of many questions asked by the gym lovers.

As you can imagine their sorrows did not change the decisions of the governments. Therefore many people quickly realized that the only possible way to stay fit, is to start exercising at home. Gym equipment, which may be used at home, was sold out in almost all internet websites and the praises of it started to increase rapidly. 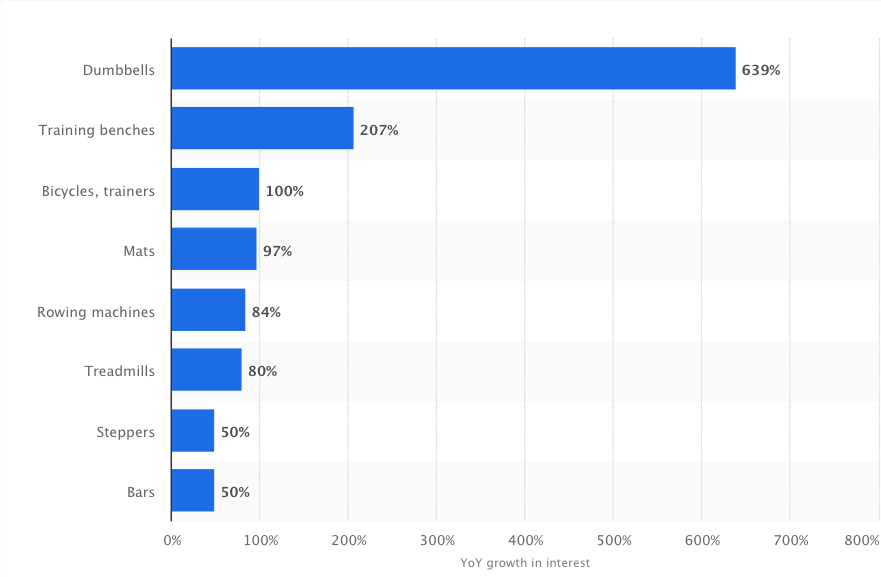 Luckily nowadays people do not have to invest their money into buying thousand or more dollars of gym-alike equipment. There exist companies, which let you borrow the machines you need for a fraction of their price and whenever you feel that you are done with using them you call the company and they pick it up from your doorstep.

A good example of a firm operating in such a way is hirefitness.co.uk. This is the biggest fitness equipment hire company in the world, which lets you rent stuff such as treadmills or steppers.

Another fitness related sector, which experienced a huge boom during the pandemic are all sorts of fitness apps. They show how we should exercise correctly, which exercises we should perform in order to maximize the muscle gains and so on. 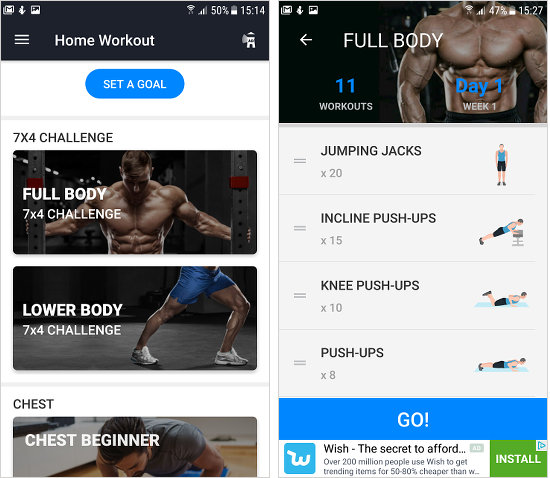 Many of them are owned by fitness influencers, who play a huge role when it comes to motivating millions of people all around the world and advertise those applications as something essential to achieve one’s fitness goals.

According to the research conducted by Gympass in March of 2020 the number of global installs of such applications reached the level 67% higher than average, which is not a surprise, as 83% of the Americans declare that they will try to do virtual workouts during pandemic times.

To conclude we can state that the pandemic limited our ability to stay fit and closing the gyms surely did not help. Although where there is the will there is a way and the numbers clearly show that.

Pandemic made them popular.

The time of pandemic was a turning point in the life of every person, especially the ones living in a civilized society. It had a negative impact on the economy of each country, however, there are some sectors which have benefited from it. One of those  is of course the industry of the online and digital world.

People were forced to change their habits. Not only the way they work, but also the approach to entertainment. The pandemic and lockdown caused by it made it impossible to participate in almost all outdoor events.

It was obvious that the internet would become the “go-to” place when talking about leisure activity and indeed that is exactly what has happened.

All platforms for streaming and organizing meetings have experienced a huge boom, which can be observed by simply looking at their skyrocketed stock prizes. 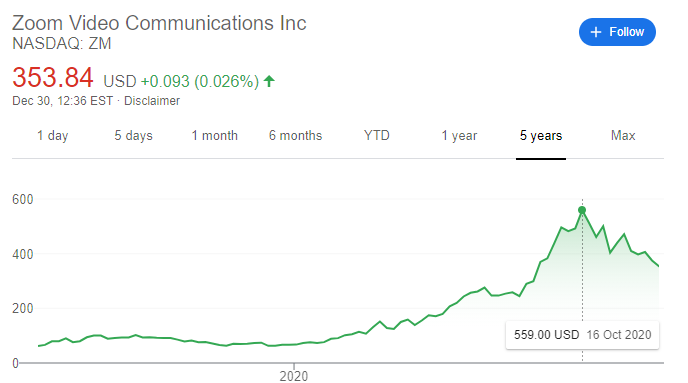 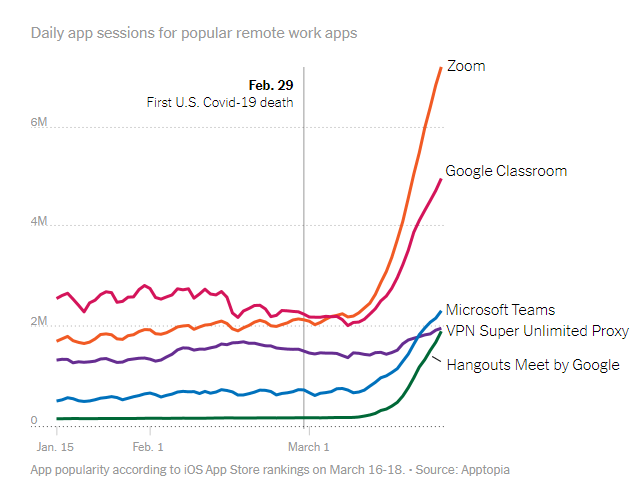 They have enabled remote work and became the place where most of us spend at least a few hours daily.

But the work-related platforms are not the only ones that gained massively from the pandemic.

The other group which gained even more popularity is oriented toward spare time. When talking about facebook, netflix or youtube. Since the “real-life activities” such as sports became almost inaccessible the attention has been attracted by game-streaming apps such as twitch or  other entertainment purpose applications like tik tok and real life sports had to take a backseat.

All those graphs show that the companies that were already big before the coronavirus pandemic became even bigger = even more wealthy.

The question is: What about us? What about individual users, that used to lead a normal life?

As one can probably expect there isn’t one way to answer such questions. Some users found a way to benefit from all the chaos that’s been happening lately.

Saying “some” I am speaking mostly about younger internet surfers, who do not have a problem with adapting to virtual reality and whose every day stronger growing influencers motivate them to try becoming stars themselves, which has been quickly realized by the social media giants.

For example Tik-Tok algorithms work in such a way that even the least popular users have a chance to break through and even go viral. This way a user never knows when his or hers video will shoot up, which works as a motivational booster.

To conclude it can be stated, that nothing unexpected has really happened. People forced to stay at home started using online communicators and social media in order to make up for feelings of loneliness. When talking about the individual people, the ones, who seem to go through the pandemic leastly affected, are the ones well prepared. The ones for whom living online is nothing new – the youngest.