Graphene the material for the future

A few years ago there was a big hype regarding the newly found material graphene and it’s for a reason, now some of these hypes has come closer to reality.

So what is graphene? Graphene, a single layer of carbon atoms, may be the most amazing and versatile material that mankind has available. It is stronger than steel, yet lightweight and flexible. In the graph, electrons move much faster than in silicon. It is also a transparent electric conductor, which combines electrical and optical properties in an exceptional manner.

These properties allows for some serious next step technology, some of the new inventions that scientists are currently working on include foldable screens, new types of composite materials, foldable organic oleds. In more distance future the talk goes around creating new retinas for those who’s are damage.

Mikael Fogelström has a TedTalk where he talk about a lot of interesting areas where graphene could be used.

To make all this happen, the European commission assigned a joint venture of researchers in the area in 2013 with a horizon until 2020. The project has been granted 1 billion € budget and consist of over 150 academic and industrial research groups in 23 countries. The project is coordinated by the Chalmers University of Technology in Gothenburg, Sweden.

In February of 2017 Austrailian scientists managed to create graphene from regular soybean oil, this is a remarkable new finding considering that high quality graphene is very expensive and has previously only been made under very special conditions in high-tech labs. [1]

What would you do with a material like graphene ?

The real value behind Bitcoin

Bitcoin has been around for some time now but few has grasped the real value behind the currency, or technology if I may. First off, let’s go through what bitcoin actually is.

Bitcoin is a completely new type of currency. The purpose is the same as with any other money – to use as payment or to store value – but otherwise there is a lot of differences.

Bitcoin has no central issuer, such as the US dollar, or basically any other currency. Instead, created Bitcoins in predetermined rate in a P2P network where anyone can join and where all transactions are journaled. The available amount of Bitcoins increases rapidly at first but the growth rate is reduced and the total amount of stops to finish at around 21 million.

Transactions can be made directly between users without any third-party intervention. Usually if you want to transfer money from your bank account to a friend, you must take the help of the bank and the bank will know exactly which transactions you do. In contrast to regular money, transferring Bitcoins can be done anonymously and directly between individuals, as the transaction is overviewed by the system itself.

Despite the similarities with cash is not possible to counterfeit Bitcoins in the same way that you can create a copy of a note. Bitcoin is based on encryption technology and uses asymmetric encryption to sign transactions. Without access to the private keys that correspond to your assets is no way to steal your money, and again this is verified through the network.

Bitcoin is ideal for fast transfers of money between individuals or companies worldwide. Transaction costs are very low thanks to the P2P network to confirm transactions, and transfer fast and easy. In one hour, a transaction confirmation and ready, compared to several days for international bank transfers.

Here are a short video about Bitcoins.

However as I see it the real value is not the bitcoin itself but the block-chain technology. The area that I think can benefit most is the financial sector. Few knows how complicated everything actually is when for example buying and selling stocks.

The delivery of the stocks that you have been buying is usually 3-4 days after the actual purchases, and many times the person has already sold them before even getting them. This comes with massive amount of administrative work, that’s one of the reasons all the big banks have so many employees – for the back office.

Some financial products are somewhat easier, since they are not always a deal between two private parties, the picture below gives a glance at how complex the system is 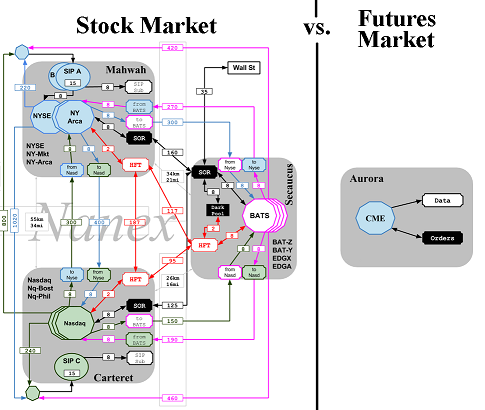 Whit the block-chain technology this could be simplified, instead of having the real delivery of the stocks the holdings could just be verified by the network itself.

19th December of 2016 Reuters reported that Goldman Sachs and JP Morgan had started to invest in block-chain startups, which is a indicator that something is happening in the industry.

Although, just like most new things – it takes time. For the system to be fully working all parties has to be involved and that will demand huge investments from all financial firms, and most of them are not willing to do that right now.

Tesla is not futuristic, Lilium Aviation is!

Lilium Aviation devlopes a futuristic areoplane that can takeoff vertically, and of course also land vertically1. The base of the technique is the same as the French fighter jet Mirage uses.
The futuristic product has gained interest among risk capitalist, one of Sweden’s most famous entrepreneurs Niklas Zennström has invested 10 million euros in the company. He states that one thing that he likes about the project is the fact that it’s just a prototype so far to make the concept work before scaling up production.
The prototype is of course made out of lightweight materials combined with electrics fans to power the machine. Lilium Atviation is based in Germany, founded by engineers and PhDs from the university of Munich. Lilium Atviation is just one of many startups that try to create a flying vehicle for the everyday use.

Another company that has come further with their prototype is the Slovenian company AeroMobile2. They have stated that they are planning to start selling their product on the market in 2017. Although their AeroMobile 3.0 looks more like a modified airplane rather than something completely new.
However what we can conclude is that at some point in the not too distance future there will be a personal transportation that is not land-bound.

Is the golden era for gasoline cars over?

Some people might say that Elon Musk is the man who killed the gasoline car through his company Tesla. It’s impossible to argue that Tesla have not opened the eyes of the big masses and in some ways revolutionized the car industry. The public view of electric cars has changed with the introduction of Tesla model S, the electric car can be stylish and fast. However, how much has really changed? According to statistia.com1 the number of electric cars sold has gone from about 100 thousand in 2013 to estimates suggest that about 1,3 million has been sold in 2016. Tesla has sold approximately 170 0002 cars since the introduction of the Tesla Roadster in 2008. To put this number in perspective, the total number of sold cars in 2016 amounts to roughly 75 million3 this makes the number of electric cars to about 1,7% of the total.
To me this suggest that the golden era of the combustion powered car has not come to an end rather than a new phase. It’s said that sport cars are usually ahead when it comes to technology, if this is true we will see a lot of more hybrid cars and they will be more advanced than ever. The last few years all large sport cars manufactures have released new cars. Ferrari introduced their La Ferrari, McLaren came up with their extreme P1, Porsches contribution was the 918 Spyder and perhaps the most extreme came from Swedish company Koenigsegg when they introduced the all new Regera. Christian von Koenigsegg the CEO and founder of Koenigsegg states that there are much more to be done with the development of the traditional combustion engine. For example, Regera4 has no gearbox which is very unorthodox. Christian is involved with other companies and subsidiaries of Koenigsegg that develop new technology to improve the efficiency and performance of the traditional engines.
There is no doubt that the trend suggests an increase in the numbers of electric cars being sold, but that does not take into consideration the already existing stock of traditional gasoline powered cars. So even if media may suggest that the combustion engine is dead, it will take a very long time until won’t be around anymore, and until then we will see more new inventions that will make the combustion engine better in every way.